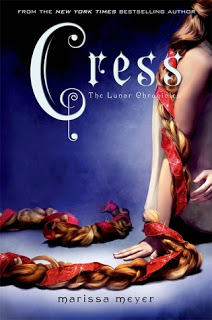 Series: Lunar Chronicles #3
Author: Marissa Meyer
Publication Year: 2014
Pages: 550
Publisher: Feiwel & Friends
Date Started: February 4, 2017
Date Finished: February 15, 2017
Format: Kindle
Beverage of choice: Zesty orange soda
I have to hand it to Meyer, I think this is the first series I have read that gets consistently better with every installment. Cress was a fun book from cover to cover.
I am a sucker for fairy tale retellings, and it’s easy to get me to start one, but I usually get bored and frustrated if it goes on too long (Once Upon a Time, anyone? Ugh). I was especially nervous to begin the Lunar Chronicles, due to the fact that it is a space opera. Not usually my thing. The series begins with Cinder, the story of a cyborg girl pining after her prince. It was predictable, and I wasn’t too fond of the characters. Then comes the sequel, Scarlet, where the main character’s grandmother goes missing and a man named Wolf assists in the search. At this point in the story, the world building and character development starts for real, so that by the time we enter Cress, the young hacker who has been locked in a satellite (Rapunzel-style) is ready to be rescued.
Unlike the other installments in this series, I was drawn into the story in Cress from page one. While the characters are okay one their own, a certain charm explodes from the pages when they exist in a group together.
What I really appreciated was the ease in which Meyer could split and form the group of characters with such precision and believability. The situations that the characters experience and the manner in which they react are plausible, even when dealing with an evil moon space queen with magical powers.
While a little on the longer side, this book read with such ease that it felt much shorter. If you can make it through the first two books, Cress is certainly worth the time. This is a four book series, so now Winter, the final volume, is definitely on my to-read list.
Until then, overall, 3.5/5 moose