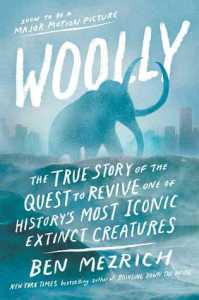 *I would like to thank the publisher, author, and NetGalley for providing an ARC copy of this book in exchange for an honest review*

Woolly is a dramatized retelling of the scientific journey to bring the woolly mammoth back from extinction. The story follows several scientists through their discovery process and establishment of both the science and collaborations. I find de-extinction to be a fascinating topic, and a great conversation starter, especially surrounding the ethical implications. However, this book does not really touch on that.

I found this book strange, though this may be due to me being a scientist. Every event was described in such detail, and in many cases quite dramatically. Scenes that took place in the laboratory, if adapted to film, would have a pretty extreme soundtrack. Granted, maybe these labs do indeed have the most action-packed pipetting known to man, but I highly doubt it. And while I rolled my eyes at such details, I still had fun with the novel. Having the first and last chapter take place in the future, however, really strayed from the scientific reality I was hoping to gain from the work. Personally, I would have like more emphasis on the science, but it was an entertaining read.